Have you noticed any changes in your mouth lately?

There are a heap of signs that could suggest you’re on the verge of gum disease. In most cases, gum disease is the next progression of gingivitis but for some, the symptoms of the condition may not even emerge until it is in a more advanced stage.

Here at South Burnett Dental Group in Kingaroy, we believe that the best way to beat gum disease is by isolating the symptoms early. As one of the most common yet treatable diseases, gum disease (periodontal disease) has the potential to cause major issues for your smile.

So what is periodontal disease?

Periodontal or gum disease is inflammation of the gums caused by bacteria. As the condition of the gums worsen, the bone that holds the teeth in place becomes damaged, eventually causing tooth loss if left untreated.

In a publication released in 2012 by the Australian Institute of Health and Welfare, periodontal disease was described as the 5th most prevalent health problem among Aussies and according to Bupa Australia, the condition is thought to affect around 20% of Australian adults and is the most common cause of tooth loss globally.

In this article we will show you how you can keep your beautiful smile shining for a lifetime simply by keeping an eye out for the following warning signs.

#1 – Do your gums bleed when you brush, floss or eat food?

Even if you’re a consistent daily flosser it isn’t unusual for people to notice the odd spot of blood on the floss or along the gum line from time to time. Although it may seem not all that worrying at the time, it’s important to consider what exactly is causing the little red spots to appear.

An easy comparison would be what if every now and then when you brushed your hair you found a little blood on your brush? You’d be concerned and probably a little freaked out right? Having bleeding gums is worth a little worry.

#2 – Are your gums swollen or tender?

Inflamed gums typically cause pain when you brush and usually feel sore and irritated when they are poked or prodded. When your gums are swollen it’s pretty likely they are bleeding when you floss as well because swollen gums are generally a symptom of a bacterial infection.

You know that stuff on your teeth called plaque that your toothpaste brands are always going on about? Well plaque forms when the bacteria in your mouth gets together and has a party. It’s not a fun kind of party ether – it’s the kind where you have to clean up after them twice a day.

Plaque appears as a sticky substance that hangs around your teeth and gums causing discolouration and infection. 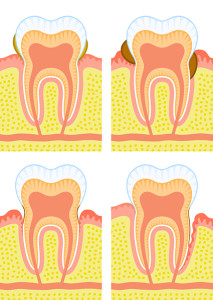 If the other two symptoms didn’t send alarm bells a-ringing then loose teeth certainly should! When it comes to loose teeth, your main concern is really what has caused them to be wobbly? One of the main causes of tooth loss is periodontal disease.

If you have a look at this image of the progression of gum disease, you can see that when  the bacteria builds up against your gums it causes the tissues to become infected and eventually can cause the tissues that hold the tooth in place to become damaged. When the tooth becomes loose and is left untreated it’s more likely to fall out and replacing teeth is far more time consuming, damaging and costly than treating the initial problem.

Prevention is ALWAYS better than a cure

Generally bleeding gums, inflammation, wobbly teeth and other symptoms such as bad breath or sores in the mouth can be mistaken for gingivitis. Most people in the course of their lifetime will have gingivitis at least once but the best way to discern whether you have gingivitis or periodontal disease is by booking a check-up appointment with our team today.

Even if your condition is only temporary, during your appointment we can remove the plaque and tartar from your teeth and gums and also offer helpful advice to get your oral health back on track.

Do you think you may have gum disease?

Whether your gum disease stops, slows, or gets worse depends a great deal on how well you care for your teeth and gums every day, from this point forward.

Here at South Burnett Dental Group in Kingaroy we suggest you book an appointment with our team today and find out how we can help you achieve a beautiful healthy smile that can last you for the rest of your life.